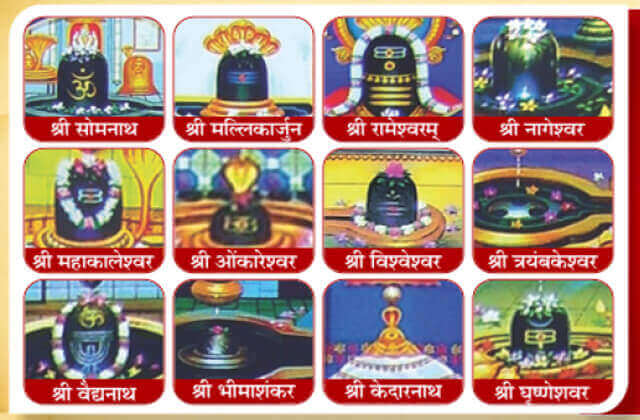 A Jyotirlinga or Jyotirlingam, is a devotional representation of the Supreme God Shiva. Jyoti means 'radiance' and lingam the 'Image or Sign' of Shiva; Jyotir Lingam thus means the Radiant Sign of The Almighty Shiva.

Originally there were believed to be 64 jyothirlingas while 12 of them are considered to be very auspicious and holy. Each of the twelve jyothirlinga sites take the name of the presiding deity, each considered a different manifestation of Shiva.

Somnath is traditionally considered the first pilgrimage site: the Dwadash Jyotirlinga pilgrimage begins with the Somnath Temple. The temple, that was destroyed and re-built sixteen times, is held in reverence throughout India and is rich in legend, tradition, and history. It is located at Prabhas Patan (Somnath - Veraval) in Saurashtra region of Gujarat state in western India.

Mallikārjuna, also called Śrīśaila, is located on a mountain in Kurnool District in Rayalaseema. It enshrines Mallikarjuna in an ancient temple that is architecturally and sculpturally rich. It is a place where Shakti peetha and Jyotirlingam are together. Adi Shankara composed his Shivananda Lahari here.

Mahakal, Ujjain (or Avanti) in Madhya Pradesh is home to the Mahakaleshwar Jyotirlinga temple. The Lingam at Mahakal is believed to be Swayambhu, the only one of the 12 Jyotirlingams to be so. It is also the only one facing south and also the temple to have a Shree Rudra Yantra perched upside down at the ceiling of the Garbhagriha (where the Shiv Lingam sits). It is a place where Shakti peeta and Jyotirlingam are together.

Omkareshwar is in Madhya Pradesh on an island in the Narmada River and home to a Jyotirlinga shrine and the Mamaleshwar temple.

Kedarnath in Uttarakhand is revered as the northernmost and the closest Jyotirlinga to Lord Shiva's eternal abode of Mount Kailash. Kedarnath forms a part of the smaller Char Dham pilgrimage circuit of Hinduism. Kedarnath, nestled in the snow-clad Himalayas, is an ancient shrine, rich in legend and tradition. It is accessible only for six months a year.

The Kashi Vishwanath Temple in Varanasi, Uttar Pradesh is home to the Vishwanath Jyotirlinga shrine, which is perhaps the most sacred of Hindu shrines. It is also one of the Padal Petra Stalam of Vada Naadu mentioned in Thevaaram. The temple is situated in Varanasi, the holiest city for Hindus, where a Hindu is expected to make a pilgrimage at least once in his life, and if possible, also pour the remains of cremated ancestors on the River Ganges.

The Trimbakeshwar Temple, near Nasik in Maharashtra, is a Jyotirlinga shrine associated with the origin of the Godavari River.

Nageshvara Jyotirlinga is one of the 12 Jyotirlinga shrines mentioned in the Shiva Purana and the Dvādaśa Jyotirliṅga Stotram, says one of the jyotirlinga namely Nagesh is situated in Daruka-Vana and most probably the present day Dwarka region.

Baidyanath Jyotirlinga temple, also known as Baba vaidyanath dham and vaidyanath dham is one of the twelve Jyotirlingas, the most sacred abodes of Shiva. It is located in Deoghar in the Santhal Pargana division of the state of Jharkhand, India. It is a temple complex consisting of the main temple of Baba Vaidyanath, where the Jyotirlinga is installed, and 21 other temples. or Parali in Maharashtra

Rameswaram in Tamil Nadu is home to the vast Ramalingeswarar Jyotirlinga temple and is revered as the southernmost of the twelve Jyotirlinga shrines of India. It enshrines the Rameśvara ("Lord of Rama") pillar. It is also one of the Padal Petra Stalam of Pandya Naadu mentioned in Thevaaram.

Ghrishneshwar Temple, sometimes referred to as the Dhushmeshwar temple, is one of the 12 Jyotirlinga shrines mentioned in the Shiva Purana